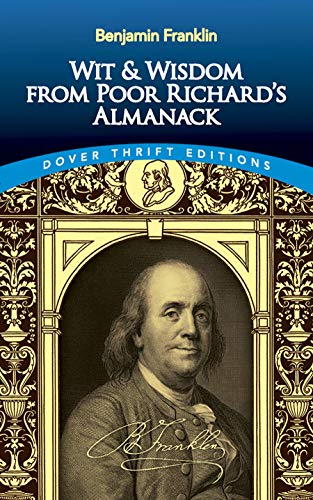 Paperback (Dover Publications May 14, 1999) , unknown Edition
First published in 1732 by Benjamin Franklin when he was just 26, Poor Richard's Almanack was issued annually for the next 25 years. Extremely popular with readers of the day, the Almanack was a fascinating compilation of weather predictions, recipes, jokes, and delightful aphorisms — many representing Franklin's common-sense philosophy, and others, proverbs from the past.
This handy little volume presents hundreds of these charming maxims, carefully selected from a number of Franklin's "almanacks." Arranged in nearly 30 categories (eating and drinking; men, women, and marriage; friendships; money and frugality; religion; professions and occupations, etc.), they include such familiar phrases as:
Early to bed and early to rise, makes a man healthy, wealthy and wise.
Haste makes waste.
Love your Neighbour; yet don't pulldown your Hedge.
He that lies down with Dogs, shall rise up with fleas.
Hunger never saw bad bread.
He's a Fool that makes his Doctor his Heir.
He that has not got a Wife, is not yet a compleat Man.
An ideal sourcebook for writers, public speakers, and students, this practical and entertaining little book will also delight general readers with its rich store of time-honored folk wisdom.

Enjoy reading Wit and Wisdom from Poor Richard's Almanack? You may also like these books