Jabberwocky and Other Poems 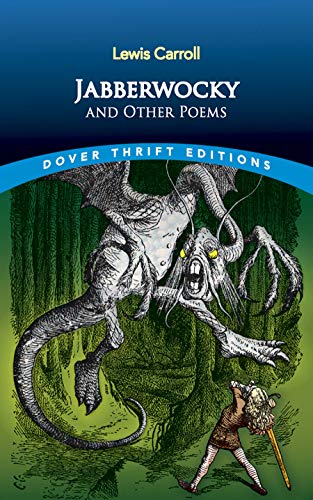 Jabberwocky and Other Poems

Paperback (Dover Publications June 14, 2001) , Dover ed Edition
Mathematician, author, photographer, and artist, Lewis Carroll (Charles Lutwidge Dodgson, 1832–1898) is best known as the creator of Alice's Adventures in Wonderland, but he was also a prolific poet. Over the course of almost 50 years, he created 150 poems, including nonsense verse, parodies, burlesques, acrostics, inscriptions, and more, many of them hilarious lampoons of some of the more sentimental and moralistic poems of the Victorian era.
This carefully chosen collection contains 38 of Carroll's most appealing verses, including such classics as "The Walrus and the Carpenter," "The Mock Turtle's Song," and "Father William," plus such lesser-known gems as "My Fancy," "A Sea Dirge," "Brother and Sister," "Hiawatha's Photographing," "The Mad Gardener's Song," "What Tottles Meant," "Poeta Fit, non Nascitur," "The Little Man That Had a Little Gun," and many others.
Filled with Carroll's special brand of imaginative whimsy and clever wordplay, this original anthology will delight fans of the author as well as other readers who relish a little laughter with their lyrics.

Enjoy reading Jabberwocky and Other Poems? You may also like these books