His Last Bow: Some Reminiscences of Sherlock Holmes 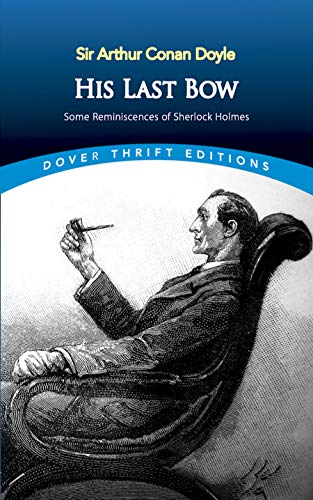 His Last Bow: Some Reminiscences of Sherlock Holmes

Paperback (Dover Publications Nov. 16, 2016)
During the dark days of World War I, a young British soldier asked Arthur Conan Doyle what Sherlock Holmes was doing to assist in the war effort. That encounter reputedly inspired the story "His Last Bow," in which the celebrated detective is drawn from his retirement to reunite with the ever-faithful Dr. Watson for their final challenge, unmasking a German spy.
Seven additional short stories, originally published in The StrandMagazine, recount episodes leading up to the master sleuth's grand finale. "The Bruce-Partington Plans," also involves espionage, this time in an earlier setting and concerning the recovery of purloined plans for building a submarine. Other mysteries find Watson and Holmes pursuing a deposed dictator, unraveling a crime of passion, tracking down a foreign crime syndicate, outwitting a poisoner, investigating an heiress's disappearance, and interrupting their vacation in Cornwall to solve a devilish case of murder and madness.

Enjoy reading His Last Bow: Some Reminiscences of Sherlock Holmes? You may also like these books