Curses and Smoke: A Novel of Pompeii

By title
Curses and Smoke: A Novel of Pompeii
By author
Vicky Alvear Shecter
By publisher
Arthur A. Levine Books
At
Level Z+
Format
Other Formats & Editions
Z+* 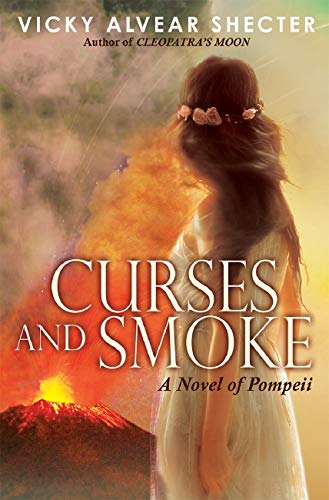 Curses and Smoke: A Novel of Pompeii

Hardcover (Arthur A. Levine Books May 27, 2014)
TAG is a medical slave, doomed to spend his life healing his master's injured gladiators. But his warrior's heart yearns to fight in the gladiator ring himself and earn enough money to win his freedom.

LUCIA is the daughter of Tag's owner, doomed by her father's greed to marry a much older Roman man. But she loves studying the natural world around her home in Pompeii, and lately she's been noticing some odd occurrences in the landscape: small lakes disappearing; a sulfurous smell in the air. . . .

When the two childhood friends reconnect, each with their own longings, they fall passionately in love. But as they plot their escape from the city, a patrician fighter reveals his own plans for them -- to Lucia's father, who imprisons Tag as punishment. Then an earthquake shakes Pompeii, in the first sign of the chaos to come. Will they be able to find each other again before the volcano destroys their whole world?

Enjoy reading Curses and Smoke: A Novel of Pompeii? You may also like these books