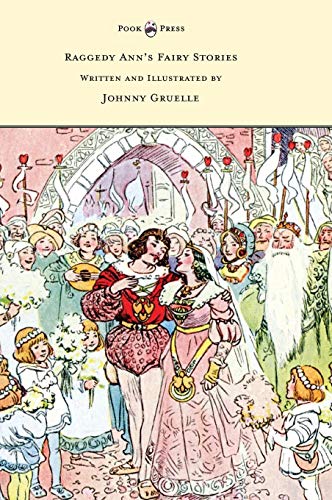 Hardcover (Pook Press Nov. 14, 2014)
'Raggedy Ann's Fairy Stories' is written and illustrated by Johnny Gruelle. Gruelle (1880 - 1930), was an American artist and political cartoonist, as well as a children's book illustrator and author. The books of 'The Raggedy Ann Series' all feature their central protagonist, with red yarn for hair and a triangle nose - charting her considerable adventures. Gruelle created Raggedy Ann for his daughter, Marcella, when she brought him an old hand-made rag doll. He drew a face on it, and from his bookshelf, pulled a book of poems by James Whitcomb Riley, combining the names of two poems, 'The Raggedy Man' and 'Little Orphant Annie.' From this moment on, the much-loved children's series went from strength to strength. Sought after by collectors, this re-printed edition showcases Gruelle's original text, further enhanced by his wonderful colour drawings, in order that the two may be fully appreciated by young and old alike.

Enjoy reading Raggedy Ann's Fairy Stories - Written and Illustrated by Johnny Gruelle? You may also like these books