The Justice Trilogy: Justice and Her Brothers, Dustland, and The Gathering

By title
The Justice Trilogy: Justice and Her Brothers, Dustland, and The Gathering
By author
Virginia Hamilton
By publisher
Open Road Media Teen & Tween
At
Level X
Format
Other Formats & Editions
X* 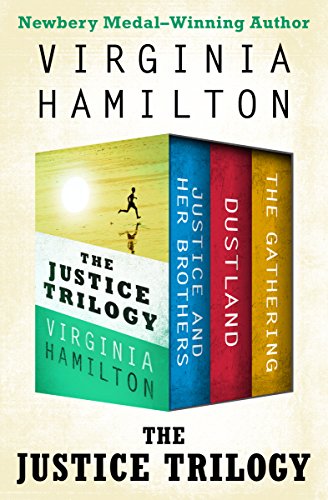 The Justice Trilogy: Justice and Her Brothers, Dustland, and The Gathering

eBook (Open Road Media Teen & Tween Sept. 11, 2012)
Four young people must master their powers in order to escape from a barren, dangerous land in these three novels by a Newbery Medal winner.

Justice and Her Brothers: For Justice and her identical twin brothers Levi and Thomas, the summer begins like any other. But as the slow days pass, Justice begins to notice a strange energy between her brothers, beyond their normal twin connection. Thomas becomes increasingly bossy and irritable, while Levi seems weak and absentminded. And there are changes happening within Justice, as well. Soon she discovers that she possesses a mysterious, extraordinary ability—and she and her brothers must uncover the secrets behind their newfound powers.

Dustland: Using their psychic abilities, four children have formed a unit: Justice, the Watcher; Dorian, the healer; Thomas, the magician; and Levi, the sufferer. Together, they mind-travel to a strange future world called Dustland. And together they can survive anything. But when tensions run high between Thomas and Justice, will Thomas leave them stranded in this desolate land? With the future of their unit uncertain, the children are threatened by an even greater danger: Mal, the evil entity that controls Dustland.

The Gathering: Justice, Dorian, Thomas, and Levi have unfinished business in the future. Joining together once again and time-traveling to Dustland, they hope to guide the inhabitants out of the dangerous, barren place in the hopes of finding a safer home. But neither they nor the residents of Dustland are truly safe as long as the sinister Mal remains in power.

This volume includes all three of these stories filled with fantasy and adventure, by an author who has won many awards, including the Boston Globe–Horn Book Award, the Hans Christian Andersen Award, and the Coretta Scott King Award, as well as the National Book Award for her novel M.C. Higgins, the Great.

Enjoy reading The Justice Trilogy: Justice and Her Brothers, Dustland, and The Gathering? You may also like these books