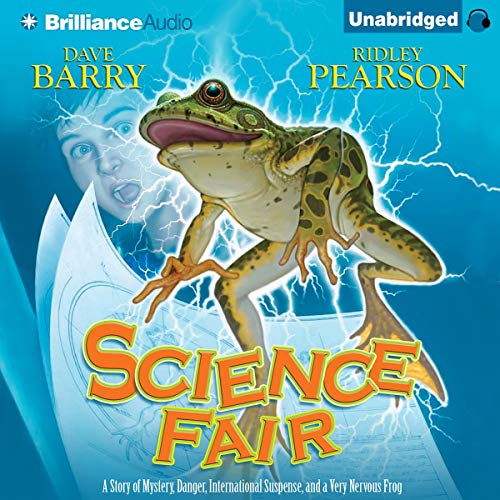 Audiobook (Brilliance Audio Oct. 14, 2008) , Unabridged
Toby Harbinger, an eighth grader at Hubble Middle School near Washington, D.C., is in big trouble. He made the mistake of selling his dad's priceless original Star Wars blaster to a lunatic who thinks he's Darth Vader and travels with a large, hairy sidekick known as the Wookiee. Now the lunatic wants more from Toby, whose only hope of getting out of this mess is to win first prize at the school science fair: $5,000.

But others want the prize too - a group of rich students and their super-ambitious, high-powered parents, who will stop at nothing to see their spoiled kids win. What these parents don't know is that an evil mastermind is using them to get hold of top-secret military technology as part of a fiendish plan to destroy the United States.

When Toby discovers this plot, he and his two best friends, Tamara and Micah, try to alert the school authorities, including the fearsome principal, known as The Hornet. But powerful forces are working against Toby and his friends: they're snared in a frame-up and get taken into federal custody, facing espionage charges. Meanwhile, the mastermind proceeds with his evil plan of destruction.

In a desperate bid to escape, the kids find themselves in league with a fairly mad scientist and two bumbling foreign dignitaries armed with cheese so smelly it is used as wolf repellent. With the seconds ticking away and the FBI close on their heels, this bizarre band sets off on a madcap mission to stop the science fair - and save the country before it's too late...