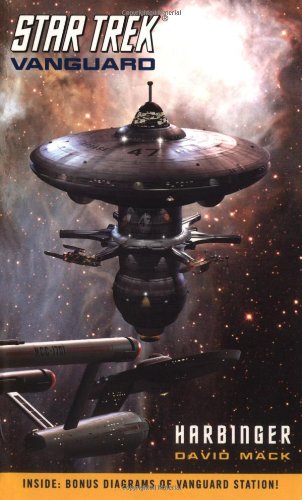 Mass Market Paperback (Pocket Books July 26, 2005) , 1st Pocket Books Paperback edition
FROM THE USA TODAY BESTSELLING AUTHOR OF STAR TREK ®: A TIME TO HEAL, THE START OF A NEW EPIC IN THE ERA OF THE ORIGINAL SERIES

Returning from its historic first voyage to the edge of the galaxy, the damaged U.S.S. Enterprise journeys through the Taurus Reach, a vast and little-known region of space in which a new starbase has been unexpectedly established. Puzzled by the Federation's interest in an area so far from its borders and so near the xenophobic Tholian Assembly, Captain James T. Kirk orders the Enterprise to put in for repairs at the new space station: Starbase 47, also known as Vanguard.

As Kirk ponders the mystery of the enormous base, he begins to suspect that there is much more to Vanguard than meets the eye. It's a suspicion shared by the Tholians, the Orions, and the Klingon Empire, each of whom believes that there are less than benign motives behind the Federation's sudden and unexplained desire to explore and colonize the Taurus Reach.

But when a calamity deep within the Reach threatens to compromise Starfleet's continued presence in the region, Kirk, Spock, and several key specialists from the Enterprise must assist Vanguard's crew in investigating the cause of the disaster and containing the damage. In the process, they learn the true purpose behind the creation of Vanguard, and what the outcome of its mission may mean for life throughout that part of the galaxy.

Inside: Bonus diagrams of Vanguard station!

Enjoy reading Harbinger? You may also like these books