A to Z Mysteries: Books H-J: The Haunted Hotel; The Invisible Island; The Jaguar's Jewel

By title
A to Z Mysteries: Books H-J: The Haunted Hotel; The Invisible Island; The Jaguar's Jewel
By author
Ron Roy David Pittu
By publisher
Listening Library (Audio)
By series
A to Z Mysteries
At
Level N
Format
Other Formats & Editions
N* 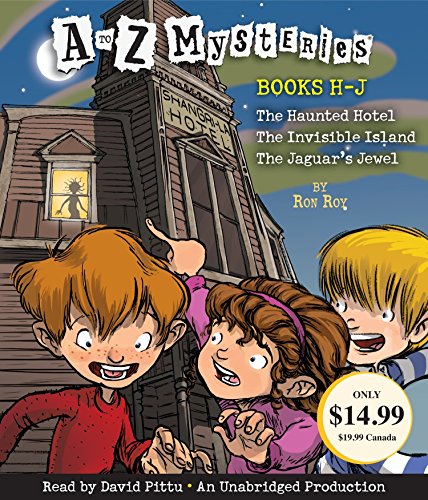 A to Z Mysteries: Books H-J: The Haunted Hotel; The Invisible Island; The Jaguar's Jewel

Audio CD (Listening Library (Audio) June 12, 2012) , Unabridged edition
THE HAUNTED HOTELH Is for Haunted . . . A ghost has checked into the Shangri-la Hotel! It’s almost Halloween, andreports of strange sounds and even stranger sights are coming from Green Lawn’s only hotel.Every day, more and more guests are being scared away. Dink, Josh, and Ruth Rose mustfigure out what’s going on and catch the ghost—before Green Lawn turns into a ghost town!THE INVISIBLE ISLANDI Is for Island . . . It’s a beautiful day for a picnic! Dink, Josh, and Ruth Rose pack up a basketand wade out to Squaw Island to eat and explore. Before they can even spread their blanket,they find a hundred-dollar bill in the sand! But when the kids come back the next day, theentire island has mysteriously disappeared. What is the secret of Squaw Island?THE JAGUAR’S JEWELJ Is for Jewel . . . When the kids visit Dink’s uncle in New York City, they’re dazzled by hismuseum’s latest treasure—a statue of a gold jaguar with a precious emerald between its paws.But when the jewel is swapped for a fake, the police name Dink’s uncle as the suspect! It’s upto Dink, Josh, and Ruth Rose to uncover the real crook. Who stole the jaguar’s jewel?

Series
A to Z Mysteries

Enjoy reading A to Z Mysteries: Books H-J: The Haunted Hotel; The Invisible Island; The Jaguar's Jewel? You may also like these books