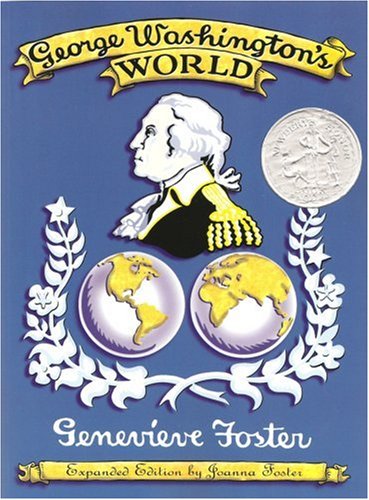 The period measured by the life of George Washington 1732 to 1799 was one of revolution and change in many parts of the world as Enlightenment thinking took hold in the minds of men. When George was a young man, Benjamin Franklin was the most well-known American, Louis XV was on the throne of France, and George II was king of England. Father Junipero Serra had just arrived in Mexico to work with the Panes Indians. Mozart and Bach were writing their immortal music and Voltaire warred with his pen against Ignorance, Injustice and Superstition. The young nobleman Lafayette watched the feisty American colonies with fascinated interest as they stood up to Mother England when she sought to tax them unfairly. James Cook was sent by the Royal Society of London to Tahiti where their team of astronomers might observe a total eclipse of the sun and thereby accurately measure the distance between the earth and the sun. These are just a few of the wonderful narratives explored by Foster in her Newbery Honor Book of 1940. Prolifically illustrated with intriguing line drawings and detailed timelines, Foster's telling of the life story of George Washington does justice to the man it celebrates.

Enjoy reading George Washington's World? You may also like these books