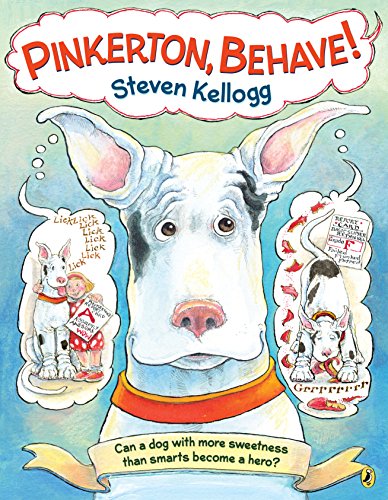 Paperback (Puffin Books Feb. 12, 2019) , Reprint edition
Pinkerton doesn't understand his owner’s commands. When told to come, he jumps out the window. When asked to fetch, he destroys the slippers instead. Pinkerton’s desperate owners take him to obedience school, but he flunks out in record time. Then one night a burglar breaks into their house, and Pinkerton is able to put his bad habits to good use.

This silly charmer of a story was included on the Booklist and Horn Book best of the year lists and inspired four sequels about the impossibly clueless but irresistibly sweet Pinkerton. Now, in honor of its 35th anniversary, Steven Kellogg has updated the art and text (most notably removing the gun that appeared in the original edition), and has written an introductory note about the book’s history.

Enjoy reading Pinkerton, Behave!: Revised and Reillustrated Edition? You may also like these books