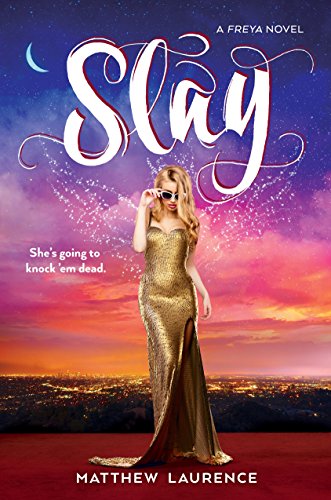 In this second book of Matthew Laurence's YA Freya series, Freya goes to Hollywood for more fame and power so she can take down her ancient enemy, the god Ares.

Her fight for freedom is over,
but the fight for power is just beginning.

After Freya escapes from the power-controlling Finemdi Corporation, her quest to defeat her new enemy takes her to Hollywood. The ancient Norse goddess of love, beauty, war, and death disguises herself once again as Sara Vanadi, now an up-and-coming star on a scandalous television series. Freya knows that today’s modern gods live on the screen, and Los Angeles offers her both fame and believers.

And she desperately needs strength from her believers.With sinister forces at her heels, an ancient enemy returned, and an unknown threat lurking in the shadows, Freya must walk a dangerous line between mortal and goddess. Because if she loses her humanity, who will save the world?

Blending fantasy and science fiction in a contemporary Hollywood setting, Slay: A Freya Novel is the second book in Matthew Laurence’s action-packed series about an ancient goddess in a modern world.

Enjoy reading Slay: A Freya Novel? You may also like these books