A Spy on the Home Front: A Molly Mystery 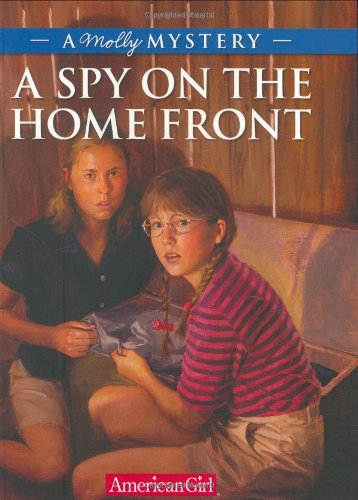 A Spy on the Home Front: A Molly Mystery

Paperback (American Girl March 1, 2005)
During a two-week stay at Grammy and Granpa's farm in the summer of 1944, Molly spends lots of time with her good friend Anna Schulz, the daughter of German immigrants who live on a neighboring farm. When Aunt Eleanor, now a WASP pilot, stops for a visit while ferrying a warplane from one airbase to another, a security check uncovers anti-American propaganda stashed aboard her plane. The FBI interrogates Eleanor but quickly zeroes in on another suspect--Anna's 17-year-old brother Max, who works at the local airfield. Though Anna knows her brother is loyal to America, she fears he'll be sent away to an interment camp as an enemy alien, as other German-American friends have been. Molly and Anna decide that the only way to clear Max is to find the person who is smuggling propaganda. With lots of daring and a little luck, the girls manage to finger the real culprit…but they discover that that may not be enough to save Max. In a poignant ending, Molly realizes that wartime, even on the home front, changes friends and family forever.

Enjoy reading A Spy on the Home Front: A Molly Mystery? You may also like these books