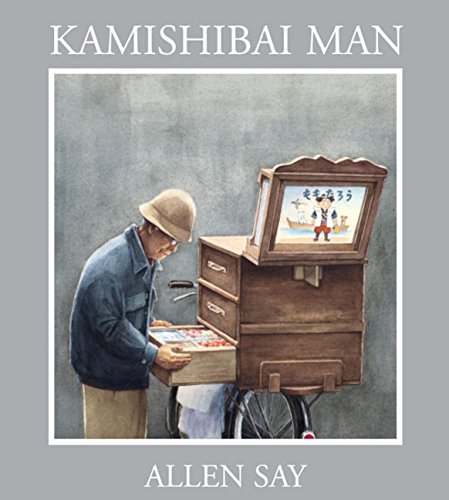 Hardcover (HMH Books for Young Readers Oct. 24, 2005) , First Edition edition
The Kamishibai man used to ride his bicycle into town where he would tell stories to the children and sell them candy, but gradually, fewer and fewer children came running at the sound of his clappers. They were all watching their new televisions instead. Finally, only one boy remained, and he had no money for candy. Years later, the Kamishibai man and his wife made another batch of candy, and he pedaled into town to tell one more story—his own. When he comes out of the reverie of his memories, he looks around to see he is surrounded by familiar faces—the children he used to entertain have returned, all grown up and more eager than ever to listen to his delightful tales.

Using two very different yet remarkable styles of art, Allen Say tells a tale within a tale, transporting readers seamlessly to the Japan of his memories.

Enjoy reading Kamishibai Man? You may also like these books