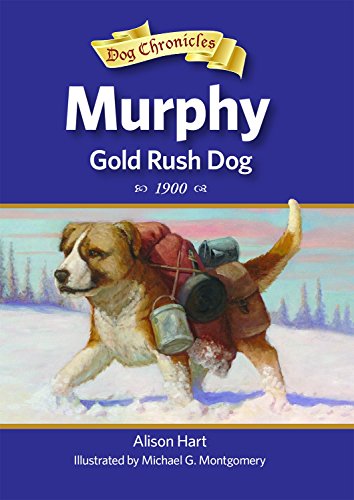 Hardcover (Peachtree Publishing Company Oct. 1, 2014)
An action-packed and heartwarming story of a dog in gold rush-era Alaska.
After escaping from his brutal and merciless owner, Murphy is taken in by a young girl named Sally. She and her mother have just arrived in Nome, Alaska, intent on joining the other gold seekers and making a new life. Yet even with Murphy at their side, Sally and Mama find living in the mining town harsh and forbidding. When it seems they may have to give up, Sally and Murphy decide to strike out on their own, hoping to find gold and make a permanent home. But dangers await them― not only blizzards and grizzly bears, but also Murphy’s original owner, who will stop at nothing to get what he wants.
In the second installment of their “Dog Chronicles” series, Alison Hart and Michael Montgomery bring readers an exciting tale exploring the roles that dogs played during the Alaskan gold rush.

Enjoy reading Murphy, Gold Rush Dog? You may also like these books