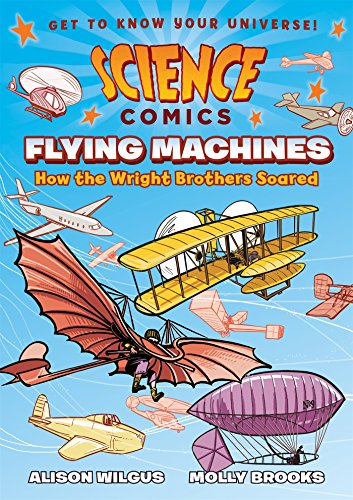 Take to the skies with Flying Machines!

Follow the famous aviators from their bicycle shop in Dayton, Ohio, to the fields of North Carolina where they were to make their famous flights. In an era of dirigibles and hot air balloons, the Wright Brothers were among the first innovators of heavier than air flight. But in the hotly competitive international race toward flight, Orville and Wilbur were up against a lot more than bad weather. Mechanical failures, lack of information, and even other aviators complicated the Wright Brothers’ journey. Though they weren’t as wealthy as their European counterparts, their impressive achievements demanded attention on the international stage. Thanks to their carefully recorded experiments and a healthy dash of bravery, the Wright Brothers’ flying machines took off.

Enjoy reading Science Comics: Flying Machines: How the Wright Brothers Soared? You may also like these books