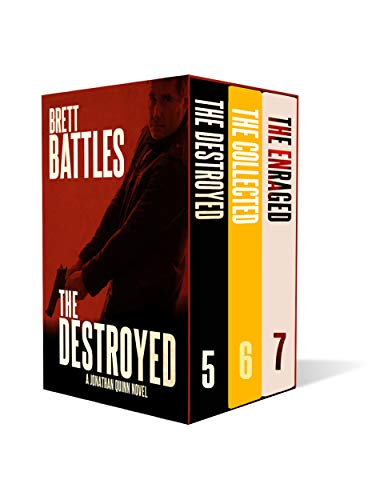 This box set consists of books 5 thru 7 of the Jonathan Quinn Thriller series.

That’s what the team hired to terminate her had reported, and that’s how her file had been marked.

So why did she suddenly show up on a hotel’s security camera in Dar es Salaam, Tanzania? Those who’d paid for her elimination are more than a little curious.

One person should know what happened—Jonathan Quinn, one of the best cleaners in the business, the man who’d been tasked with the disposal of her body.

Only Quinn isn’t exactly easy to get ahold of these days, and he may not be willing to share the answer.

A cleaner’s tasks are simple: get rid of the body so that it will never be found, and make the scene of the kill look like nothing happened.

Rule Number One: Don’t get caught.

With Jonathan Quinn’s career in question, his apprentice Nate has successfully taken on the role of full-fledged cleaner, using Quinn’s name to keep the business working seamlessly in case his boss decides to return.

But Nate’s latest job is not what it seems, and he finds himself on the wrong side of a trap.

With Nate suddenly missing, Quinn and his partner Orlando set out to find him, and learn the reasons for Nate’s disappearance are more atrocious than they anticipated.

The rescue on Duran Island did not go as planned.

Jonathan Quinn knows that someone is responsible. That someone decided that throwing people Quinn cares about into the line of fire in a cold-hearted act of self-preservation was a good idea. He also knows that this someone has made a serious mistake.

Because when Quinn gets mad, the last place anyone should ever be is in his crosshairs. He will not stop until the guilty pay.

“The best word I can use to describe Battles's writing is addictive.” — James Rollins, New York Times bestselling author

PRAISE FOR THE JONATHAN QUINN SERIES:

"Battles has a true gift for writing thriller." — Crimespree magazine

Enjoy reading The Jonathan Quinn Enraged Box Set: Books 5-7? You may also like these books