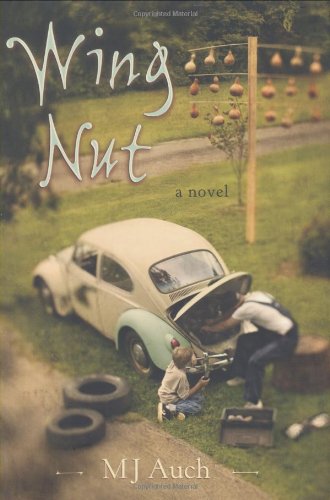 Hardcover (Henry Holt and Co. (BYR) May 1, 2005) , First Printing edition
"Grady, can you pick up that wing nut for me?"
"The what?"
"The wing nut I just dropped. It has two little projections on it that look like wings. It fell into that patch of grass."
Grady dropped to his knees and felt through the grass until he found it. He couldn't help smiling about the name--wing nut. That was the perfect description of Charlie Fernwald and his crazy attraction to birds.

Sometimes "home" is found where you least expect it

Grady Flood and his mom, Lila, have been on the road ever since Grady's dad died seven years ago. When their old car breaks down, they find themselves stranded in rural Pennsylvania where Lila gets work as a cook and caretaker. There's nothing out of the ordinary in that, unless you factor in her new employer. Eighty-five-year-old Charlie Fernwald, a skilled mechanic and bird enthusiast, is definitely out of the ordinary. In fact, if Grady's not mistaken, Charlie is a certifiable "wing nut." Grady and Lila plan to leave as soon as they have enough money to repair their car. For the time being, Grady figures, he can help Charlie with his birds and maybe even learn how to fix a car engine. But before he can do either, something goes terribly wrong.

In her warm and engaging style, MJ Auch crafts a compelling novel about family, forgiveness, and the true meaning of home.

Enjoy reading Wing Nut? You may also like these books