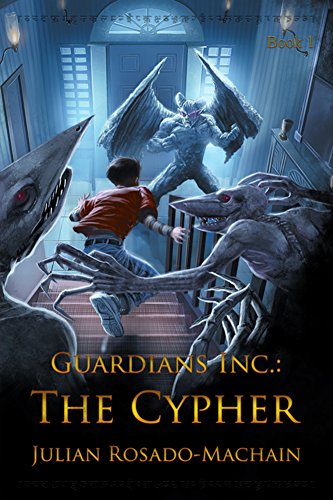 eBook (Julian Rosado-Machain July 20, 2012)
GUARDIANS INC.: THE CYPHER is two stories in one. A glimpse into a multinational company that is in reality the oldest of secret societies, one that spans close to seven thousand years of existence, weaving in and out of history, guiding and protecting humanity from creatures and forces that most of us believe are only mythology and fairy tales.

The other is the story of Thomas Byrne, a young man thrust into secrets he shouldn’t be aware of and dangers he shouldn’t face but, that he ultimately will, for he is a Cypher. The only one who can steer humanity’s future.

The ultimate conspiracy theory is that Magic is real. Kept in check by technology but, every five hundred years the balance can shift and, if it does, technology will fail and those creatures we’ve driven into myth will come back with a vengeance.

To protect the present, Guardians Incorporated needs to know the future.

Enjoy reading Guardians Inc.: The Cypher? You may also like these books