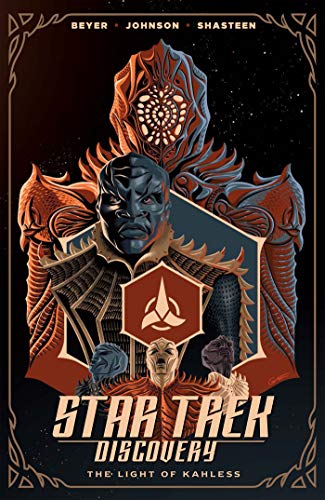 Paperback (IDW Publishing Sept. 4, 2018)
Uncover the secrets of the Klingon Empire with the diverse cast of the new Star Trek television show from CBS All Access in this tie-in comic book series.Journey back in time to a decade before Captain Kirk and the Enterprise set out on their five-year mission, when the United Federation of Planets is locked in conflict with the mysterious Klingon Empire. But just who are these formidable foes? Delve into the shocking world of the Klingons in a story you can only find in this miniseries, which ties directly into the show. Co-written by Discovery staff writer and bestselling Star Trek novelist Kirsten Beyer and longtime Trek comic book writer Mike Johnson, with art by fan-favorite Star Trek: Boldly Go artist Tony Shasteen!

Enjoy reading Star Trek: Discovery - The Light of Kahless? You may also like these books