The Monster Who Ate My Peas 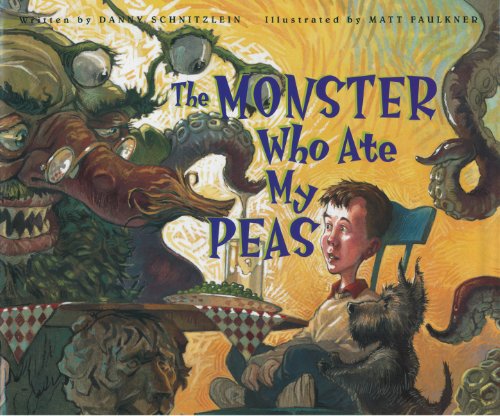 The Monster Who Ate My Peas

Paperback (Peachtree Publishing Company March 1, 2010) , 1 edition
What do you dread eating the most? For the hero of this story, it’s peas, and he thinks he’s discovered a solution.
“I closed my eyes tightly and sent out a wish
That the peas would somehow disappear from my dish.
And something quite strange and mysterious occurred,As if somehow… somebody… somewhere had heard.”
He makes a bargain with a fiendishly funny monster. First the deal is simple: the monster will eat the boy’s peas in exchange for his soccer ball. But with each new encounter, the monster’s demands escalate. Eventually, our hero faces a daunting decision―can he conquer his loathing for peas or will he lose his most prized possession?
Matt Faulkner’s uproariously detailed illustrations and Danny Schnitzlein’s Seuss-inspired verse combine to create a clever story about how far we are willing to go to avoid doing the things we hate.

Enjoy reading The Monster Who Ate My Peas? You may also like these books