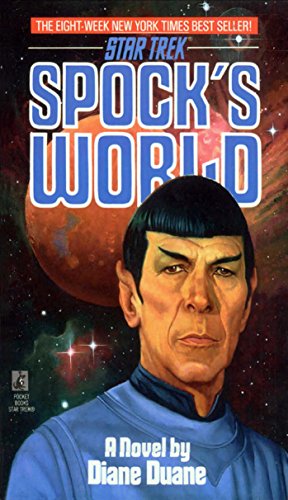 eBook (Pocket Books/Star Trek June 7, 2001)
It is the twenty-third century. On the planet Vulcan, a crisis of unprecedented proportion has caused the convocation of the planet's ruling council -- and summoned the U.S.S. Enterprise from halfway across the galaxy, to bring Vulcan's most famous son home in its hour of need.
As Commander Spock, his father Sarek, and Captain James T. Kirk struggle to preserve Vulcan's future, the planet's innermost secrets are laid before us, from its beginnings millions of years ago to its savage prehistory, from merciless tribal warfare to medieval court intrigue, from the exploration of space to the the development of o'thia -- the ruling ethic of logic. And Spock -- torn between his duty to Starfleet and the unbreakable ties that bind him to Vulcan -- must find a way to reconcile both his own inner conflict and the external dilemma his planet faces...lest the Federation itself be ripped asunder.
Diane Duane, author of three previous bestselling STAR TREK novels and an episode of the new STAR TREK NEXT GENERATION® television series, as well as countless other bestselling science fiction and fantasy novels, has crafted a tale of unprecedented scope and imagination, at once a generations-spanning historical novel and a thrilling science fiction adventure.

Enjoy reading Spock's World? You may also like these books