Order of Succession: Getting Away with Murder

By title
Order of Succession: Getting Away with Murder
By author
Bill Thompson
By publisher
Ascendente Books
By series
Brian Sadler Archaeological Mysteries
Format
Other Formats & Editions
? 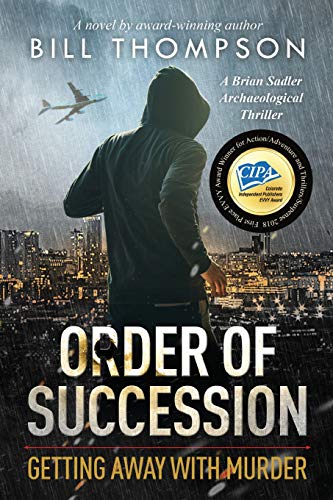 Order of Succession: Getting Away with Murder

Paperback (Ascendente Books June 3, 2016)
NOT SINCE 9/11 . . . One evening in the midst of prime-time programming, networks worldwide interrupt to announce that Air Force Two, a Boeing 747 carrying the Vice President and Secretary of State of the USA, has disappeared after leaving Honolulu, Hawaii on a flight to Hong Kong. An extensive search and rescue effort will soon be underway. President William Henry Harrison IV hears the news aboard Air Force One as he flies with his wife and children from the Caribbean to Dallas. The president’s plane changes course, heading now to a secure military installation in Florida. Then the unthinkable happens. Twenty minutes after the first plane disappeared, Air Force One vanishes too. Its last reported location was over the deepest part of the Caribbean Sea, an area known as the Cayman Trench. These two incidents, now unmistakably part of a single plan, harken back to that terrible morning on 9/11 when one tragic crash became two, then three, and the world realized it was all part of a massive terrorism plot. In Washington, Speaker of the House Chambliss T. Parkes, a greedy, vulgar buffoon, is rushed to a secret location as the nation goes to DEFCON 1, the highest threat level, for the first time in history. If the planes are truly gone, Parkes will become President of the United States. As financial markets crash, rioters take to the streets and mass hysteria threatens to destroy the framework of free-world government, the CIA must find answers. Were the two most secure aircraft in the world sabotaged? How could it have been anything else? But how could it have happened? Who is behind it and why? Brian Sadler, a wealthy adventurer and the missing President’s closest friend, becomes part of the mission to uncover a plot with worldwide implications. What could possibly get worse?

Enjoy reading Order of Succession: Getting Away with Murder? You may also like these books