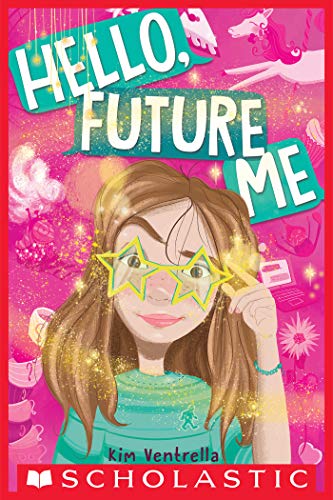 eBook (Scholastic Press Aug. 4, 2020)
Eleven-year-old June is a problem-solver. Some people might call her a busybody, but that's okay. Just look at all the couples she helped find love! (Grateful newlyweds Marlene and Big Vic have even promised June free hot chocolate for life at their café.)

However, when June learns that her parents are getting divorced, she has to face the fact that there are some problems too big even for her. At least, that's what the adults in her life keep saying.

But June's convinced there's a way to make her parents fall back in love. While brainstorming ideas on her new secondhand laptop -- purchased from a mysterious store in town called The Shop of Last Resort -- June gets a strange IM from someone named JuniePie28 . . . someone who claims to be an older version of June messaging her from the future.

At first, she assumes it's a prank. But JuniePie28 knows too much about June's life to be a fraud, and future June warns her against interfering with her parents' marriage. But June can't just sit around and watch her parents' marriage dissolve, not when there's a magical shop in town that could be the answer to all her problems! Will June prove her older self wrong and stop the divorce? Or will she have to accept that there are some things she can't control?

Enjoy reading Hello, Future Me? You may also like these books