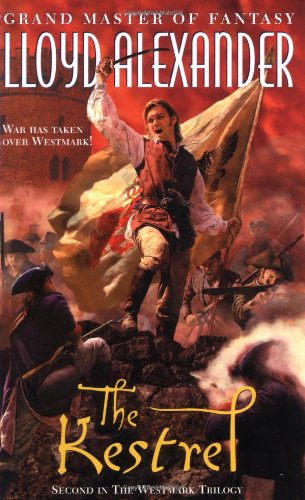 Mass Market Paperback (Firebird June 10, 2002) , Reissue edition
The second book of Lloyd Alexander's Westmark Trilogy explores the darker side of humanity and will leave you questioning everything.

Theo is traveling Westmark, learning about the country of which he will soon be Prince Consort. He is not surprised to find great poverty-Mickle (now known as Princess Augusta) could have told him that from her years on the street. His friend Florian could have told him about the aristocracy's graft and corruption. But neither could have foreseen a loaded pistol in the practiced hand of the assassin Skeit. The echoes of that shot ring from the muskets and cannons of a Westmark suddenly at war—a war that turns simple, honest men into cold-blooded killers, Mickle into a military commander, and Theo himself into a stranger . . .


"The plot is magnificent, the characterizations are excellent, and the issues are compelling."—Children's Literature

Enjoy reading The Kestrel? You may also like these books