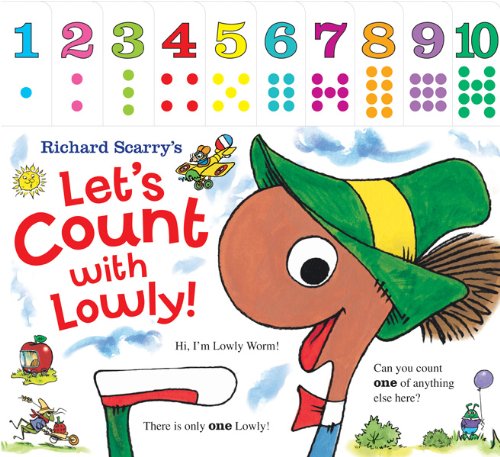 Board book (B.E.S. Publishing March 1, 2013) , Brdbk Edition
Lowly Worm starts out alone to make one, and then he joins Huckle Cat to make two. They're soon joined by Wolfgang Wolf, Harry Hyena, and other animals who teach boys and girls to count to ten. Each page has a large numbered tab visible from the front cover that designates a number from 1 to 10, indicating the number of animals kids can count. This title is one of a two-book series of Richard Scarry's Concept Books. The companion title, All the Colors of Busytown, is also available from Barron's. Toddlers who are introduced to colors and counting with Richard Scarry's Concept Books. are in for a very special visual treat! The pictures in both of these books are bubbling with humor, packed with busy and interesting details, and vibrant with all the bright colors that have made Richard Scarry one of the most beloved names in children's illustration. The books are constructed of sturdy board pages that can take punishment from tiny hands and still remain in good condition.

Enjoy reading Richard Scarry's Let's Count with Lowly? You may also like these books