By title
Centennial
By author
James A. Michener
By publisher
Fawcett
Format
Other Formats & Editions
? 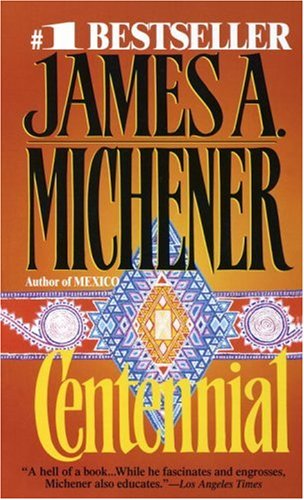 Mass Market Paperback (Fawcett Feb. 12, 1987) , Reprint Edition
Written to commemorate the Bicentennial in 1976, James A. Michener’s magnificent saga of the West is an enthralling celebration of the frontier. Brimming with the glory of America’s past, the story of Colorado—the Centennial State—is manifested through its people: Lame Beaver, the Arapaho chieftain and warrior, and his Comanche and Pawnee enemies; Levi Zendt, fleeing with his child bride from the Amish country; the cowboy, Jim Lloyd, who falls in love with a wealthy and cultured Englishwoman, Charlotte Seccombe. In Centennial, trappers, traders, homesteaders, gold seekers, ranchers, and hunters are brought together in the dramatic conflicts that shape the destiny of the legendary West—and the entire country.

“A hell of a book . . . While he fascinates and engrosses, Michener also educates.”—Los Angeles Times

“An engrossing book . . . imaginative and intricate . . . teeming with people and giving a marvelous sense of the land.”—The Plain Dealer

“Michener is America’s best writer, and he proves it once again in Centennial. . . . If you’re a Michener fan, this book is a must. And if you’re not a Michener fan, Centennial will make you one.”—The Pittsburgh Press

“An absorbing work . . . Michener is a superb storyteller.”—BusinessWeek

Enjoy reading Centennial? You may also like these books