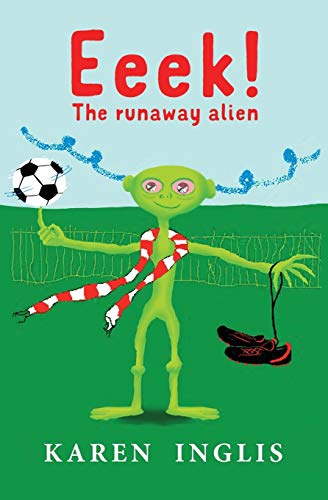 A football-loving 11-year-old, a runaway alien and the World Cup. Laugh-out-loud funny!

When 11-year-old Charlie Spruit finds an alien on his doorstep one morning, he can hardly believe his luck. Who is he? Why has he come?

As Charlie soon discovers, his new friend Eeek! is soccer-mad and has run away from his home planet because he wants to watch the World Cup on Earth!

Hiding in Charlie's bedroom, where he sleeps on the ceiling by night and pores over Charlie's football magazines and stickers by day, Eeek! is just settling in nicely when nosy neighbour Sid Spiker spots him through his telescope. Sid's plans for the alien bring surprises that no-one could have imagined...

Full of humour, this fun and fast-paced adventure story has short chapters and black and white illustrations throughout to appeal to newly independent and confident young readers alike. A perfect match for girls and boys aged 7-10!

Eeek! has been praised by teachers, librarians, reading charities and parents as a great book for keen and reluctant readers alike, and several UK schools have adopted it for Year 3 class readers or children’s books clubs. In fact, one London primary school book club voted it favourite book club read three years in a row! It was also used in the 'Get London Reading' campaign.

If you're looking for a funny chapter book for boys and girls ages 7-10 that combines humour, adventure, aliens and sport you're in the right place! Scroll up to order in print or for kindle with one click!