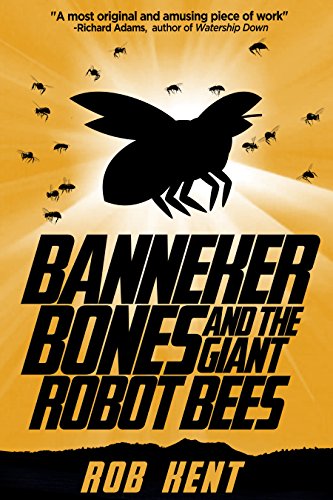 eBook (Middle Grade Ninja Press Oct. 30, 2014)
Fifth grader Ellicott Skullworth has always felt out of place at public school and now he's tested into the Archimedes Program at Latimer University. While in Latimer City, he’ll be living with his world famous and insane(ly) brilliant cousin, Banneker Bones, the eleven-year-old inventor of robots. The only problem: Banneker doesn't want to share his room. And he's got an army of robots to make Ellicott miserable until he goes home.

When the boys are ambushed by robot bees as big as cars, Ellicott's only friend is carried off and held for ransom. To rescue him, Ellicott has no choice but to partner with his maniacal cousin. Ellicott doesn't know what's worse: facing a hive of giant robot bees or spending more time with Banneker Bones.

BANNEKER BONES AND THE GIANT ROBOT BEES is a humorous, science fiction adventure for readers of all ages written in the spirit of a comic book.

“Let me say at once that I think this is a most original and amusing piece of work. A reader is arrested at the outset by a paradoxical witticism and he goes on being arrested as the story gets into its stride. Ellicott Skullworth and Banneker Bones appear as characters about whom the reader wants to learn more, and soon he begins to be in no doubt about this.”
--Richard Adams, author of WATERSHIP DOWN


Ellicott Skullworth turned back to Banneker Bones. “Well, anyway, thanks for letting me stay here.”
“Not my idea,” Banneker said. “You have my mother to thank for that. But she’s been wrong before. She adopted a stray puppy once and put it in my room to,” he made a face to show his disgust, “keep me company. The puppy survived two days.”
Banneker looked Ellicott up and down as though he were appraising something for purchase and deciding against it. “And now she’s adopted another stray, hasn’t she? We’ll just see how long you survive.”

Enjoy reading Banneker Bones and the Giant Robot Bees? You may also like these books