The Rising: A Department 19 Novel

By title
The Rising: A Department 19 Novel
By author
Will Hill
By publisher
Razorbill
By series
Department Nineteen
Format
Other Formats & Editions
? 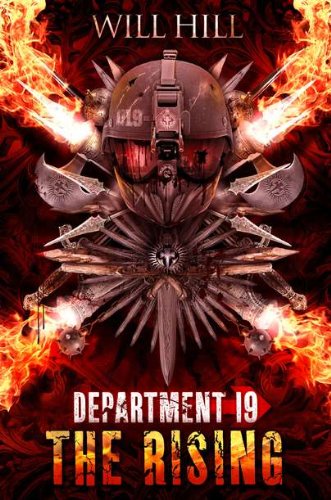 The Rising: A Department 19 Novel

Hardcover (Razorbill Aug. 16, 2012) , First American Edition edition
“Enthralling…From UV grenades to exploding stake bombs to a giant anti-vampire superweapon, the gadgets add a neat modern twist to the traditional stakings. Fans will devour the pages and thirst for the next volume.”—Kirkus

“Will keep teens who are undaunted by its 600 pages on the edge of their seats. Interweaving the stories of Jamie, Dracula, Frankenstein, and a mysterious man wandering the American desert, this book is closer to the elaborate works of Stephen King than many vampire novels marketed to teens.”—VOYA

James Bond meets Dracula in this epic saga of one boy and a ton of weapons versus the world's oldest evil--vampires as you've never seen them before!

Sixteen-year-old Jamie Carpenter's life was violently upended when he was brought into Department 19, a classified government agency of vampire hunters that was formed to deal with a little problem . . . known as Dracula.

But being the new recruit at the Department isn't all weapons training and covert missions. Jamie's own mother has been turned into a vampire--and now Jamie will stop at nothing to wreak revenge on her captors. Even if that means facing down Dracula himself.

The Rising is a fast, furious, can't-turn-away thrill ride that will suck readers in just like a video game. This riveting second book in the Department Nineteen series is packed with cutting-edge gadgets, international locales, and daredevil action that tumbles ferociously across the page--perfect for fans of Darren Shan and Anthony Horowitz.

Enjoy reading The Rising: A Department 19 Novel? You may also like these books