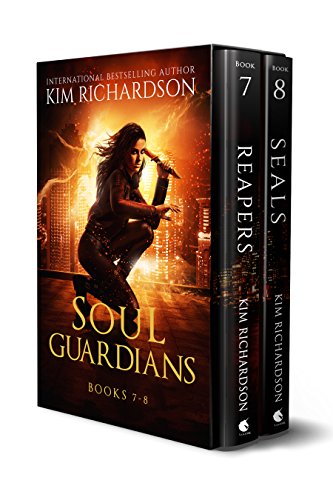 REAPERS (Book 7)
Kara has lost her elemental power, and with her guardian angel days behind her, all is back to normal—or so she thought. But when she's injected with a mysterious substance by a shadowy man, she begins to change…but into what? As Kara deals with the change that brews inside her, a new menace threatens the angels and the mortal world: Reapers. And now back in Horizon, it's up to Kara and her friends to figure out who is powerful enough to control the Reapers and how to stop them. What's worse, rumors of something far worse than Reapers surface, of beings more sinister and evil. Something that the Legion believed they had banished forever is now resurfacing—creatures rumored to be so powerful they could destroy Horizon forever.

SEALS (Book 8)
Kara has survived the threat of the Reapers, but an unspeakable cost—the Archfiends have escaped their eternal prisons. Now, with the mortal world on the brink of the apocalypse, with the threat of evil beings as powerful as gods, she must break the rules and travel across the mortal world on an unauthorized mission. Along the way she must face her darkest truth . . . a truth about the change inside her, a truth that she cannot stop. Meanwhile, the Archfiends and their brutal and monstrous forces are gathering on Earth, intent on enslaving the mortal world, and to destroy Horizon and all the angels. Will Kara find the strength to not only fight her inner demons, but to take on the evil that is about to be unleashed?

Enjoy reading The Soul Guardians Series: Books 7-8? You may also like these books