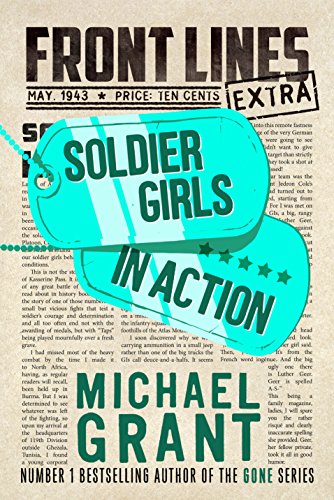 ‘This story, I knew, was about the freckle-faced soldier girl.’

North Africa, 1943. The Tunisian desert is full of dangers, with German fighters scattered across the land. Reporter Ann ‘Spats’ Patrone is looking for a story - and in fierce soldier girl Rio Richlin and a desperate night mission, she might have found one . . .

Praise for Front Lines: “What if American women had fought alongside men in World War II? Michael Grant gives us a magnificent alternate history that feels so real and right and true it seems impossible that it wasn’t. Every one of these fictional soldiers has wrapped herself around my heart.” (Elizabeth Wein, award-winning and New York Times bestselling author of Code Name Verity)

“Michael Grant is a master of twists that not only tear at his readers’ consciences, they hold a mirror up to our here and now and insist we consider what might otherwise be. Front Lines is a masterpiece of speculative story crafting.” (Andrew Smith, Printz Honor winning author of Grasshopper Jungle)

Front Lines was shortlisted for Feminist Book of the Year in the Maximum Pop Bookish Awards.

Have you read Michael's other books?

And return to the GONE universe with Michael Grant's shocking new spin-off series, starting with Monster, publishing in September this year!

Michael Grant has lived an exciting, fast-paced life. He moved in with his wife Katherine after only 24 hours. He has co-authored over 160 books including the bestselling GONE series but promises that everything he writes is like nothing you’ve ever read before!

Enjoy reading Soldier Girls in Action: A Front Lines Story? You may also like these books