The Story of Civilization: VOLUME I - The Ancient World

By title
The Story of Civilization: VOLUME I - The Ancient World
By author
Phillip Campbell
By publisher
TAN Books
At
Level T
Format
Other Formats & Editions
T* 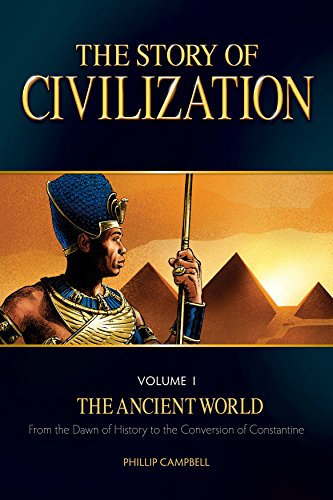 The Story of Civilization: VOLUME I - The Ancient World

Paperback (TAN Books May 10, 2016)
Children should not just read about history, they should live it. In The Story of Civilization, the ancient stories that have shaped humanity come alive like never before. Author Phillip Campbell uses his historical expertise and story-telling ability together in tandem to present the content in a fresh and thrilling way.

The Story of Civilization reflects a new emphasis in presenting the history of the world as a thrilling and compelling narrative. Within each chapter, children will encounter short stories that place them directly in the shoes of historical figures, both famous and ordinary, as they live through legendary battles and invasions, philosophical debates, the construction of architectural wonders, the discovery of new inventions and sciences, and the exploration of the world.

Volume I, The Ancient World, begins the journey, covering the time periods from the dawn of history and the early nomads, to the conversion of Emperor Constantine. Children will learn what life was like in the ancient civilizations of Egypt, Mesopotamia, Persia, Greece, Rome, and more, as well as learn the Old Testament stories of the Israelites and the coming of Christ.

The strength of the content lies not only in the storybook delivery of it, but also in the way it presents history through the faithful prism of the Church. Have you always wanted your children to learn about world history from a Catholic perspective? Here, you’ll have the trusted resource you’ve always wanted.

Did You Know…
· That young people in the Minoan culture participated in bull leaping games?
· That King Xerxes of Persia once ordered his soldiers to whip the waves when the ocean became rocky beneath their boats?
· That the Greek inventor, Archimedes, built a giant heat ray to protect his hometown, catching enemy ships on fire through the use of sunbeams?
· That the powerful Carthaginian general, Hannibal, used elephants to march his army over the Alps on his way to attack Rome?
· That Julius Caesar of Rome fell in love with the famous Cleopatra of Egypt?
Embark on the journey now to learn of all these wonders and more!

Enjoy reading The Story of Civilization: VOLUME I - The Ancient World? You may also like these books