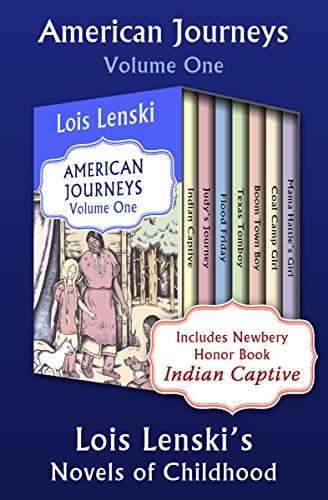 In her Newbery Honor Book, Indian Captive, and her Regional America series, six of which are collected here, author/illustrator Lois Lenski presents realistic portrayals of unforgettable young people facing hardships in a range of areas across the country.

Based on a true story, Indian Captive tells the compelling chronicle of a twelve-year-old girl kidnapped by the Shawnee in 1758 Pennsylvania. Beginning with the Children’s Book Award winner Judy’s Journey, Lenski depicted kids’ experiences in different regions of mid-twentieth-century America—from East Coast migrant workers to a Texas girl whose family is dealing with drought, from an eleven-year-old boy in oil-boom Oklahoma to the daughter of coal miners in West Virginia, from a family in a flooded western Connecticut town to an African American girl in the 1950s coping with moving north with the help of her loving grandmother.

Beyond changing the face of children’s literature, Lenski’s stories continue to endure because of their moving and believable depictions of young people from often overlooked communities. Through her art, Lenski gave these characters a voice that still rings loud and clear for modern readers.

Enjoy reading American Journeys Volume One: Lois Lenski's Novels of Childhood? You may also like these books