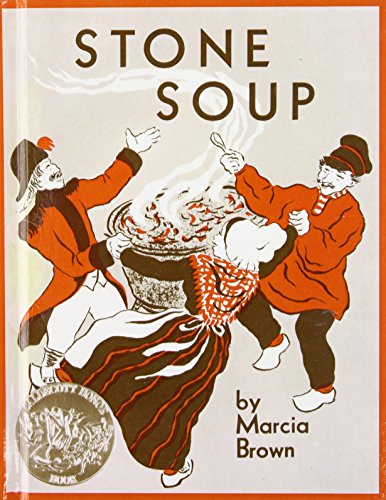 Library Binding (Paw Prints 2007-05-15 May 15, 2007)
Three soldiers came marching down the road towards a French village. The peasants seeing them coming, suddenly became very busy, for soldiers are often hungry. So all the food was hidden under mattresses or in barns. There followed a battle of wits, with the soldiers equal to the occasion. Stone soup? Why, of course, they could make a wonderful soup of stones...but, of course, one must add a carrot or tow...some meat...so it went.

Marcia Brown has made of this old tale a very gay book, a carnival of activity, of dancing and laughter. So much goes on in the pictures that children who have once heard the story will turn to them again and again, retelling the story for themselves.

A French version of the story is available under the title Une Drôle de Soupe.

Enjoy reading Stone Soup: An Old Tale? You may also like these books