A History of US 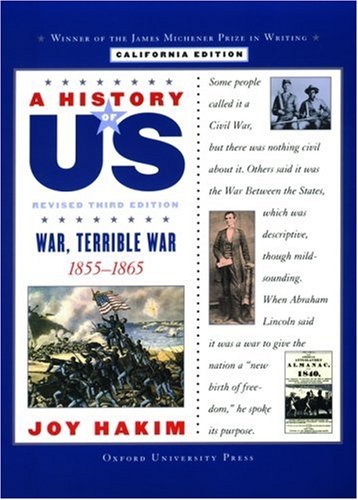 A History of US

Riveting, moving, and impossible to put down, War, Terrible War takes us into the heart of the Civil War, from the battle of Manassas to the battle of Gettysburg and on to the South's surrender at Appomattox Court House. Follow the common soldiers in blue and gray as they endure long marches, freezing winter camps, and the bloodiest battles ever fought on American soil. Off the war fields, War, Terrible War captures the passion and commitment of abolitionists and slaveowners alike in their fiery debates throughout the land. With profiles of Abraham Lincoln, Robert E. Lee, Ulysses S. Grant, John Brown, Harriet Tubman, Jefferson Davis, soldiers on both sides, slave owners, abolitionists, average citizens, and others, War, Terrible War is the compelling story of a people affected by the horrors of war during this tragic and dramatic period in A History of US.

About the Series:
Master storyteller Joy Hakim has excited millions of young minds with the great drama of American history in her award-winning series A History of US. Recommended by the Common Core State Standards for English Language Arts and Literacy as an exemplary informational text, A History of US weaves together exciting stories that bring American history to life. Hailed by reviewers, historians, educators, and parents for its exciting, thought-provoking narrative, the books have been recognized as a break-through tool in teaching history and critical reading skills to young people. In ten books that span from Prehistory to the 21st century, young people will never think of American history as boring again.

Series
A History of US (Book 6)

Enjoy reading A History of US? You may also like these books