World War One: The Unheard Stories of Soldiers on the Western Front Battlefields: First World War stories as told by those who fought in WW1 battles

By title
World War One: The Unheard Stories of Soldiers on the Western Front Battlefields: First World War stories as told by those who fought in WW1 battles
By author
Various
By publisher
CreateSpace Independent Publishing Platform
By series
Soldier Stories of WW1
At
Level Z
Format
Other Formats & Editions
Z* 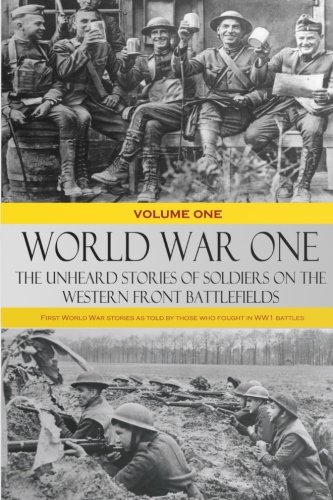 World War One: The Unheard Stories of Soldiers on the Western Front Battlefields: First World War stories as told by those who fought in WW1 battles

Paperback (CreateSpace Independent Publishing Platform June 2, 2016)
This collection of heroic soldier's stories relays sobering accounts of combat on the Western Front during the First World War. Evocative and vivid descriptions of the early stages of the conflict populate these pages, from which the reader can gain lessons of the conditions of the stagnant front. Originally published in 1915, the set of tales within this book offer sobering accounts from various battlefields which took place during the early stages of the war. Although the war was not even halfway over by the time these stories found publication, the horrors of the conflict were already a fact of life, with casualties rapidly mounting on both sides. At that time public opinion hadn’t yet fully turned against the war, and in Britain – the nationality of all the soldiers here – the need for showing progress was essential to sustain civilian and military morale. All of the soldiers in these pages were already serving in their regiments, or had volunteered for service, when the war commenced. They were commonly professional soldiers, possessed of a natural – even ingrained - patriotism, and more accepting of the official narrative than the increasingly sceptical and fearful citizenry back home. There is however no doubt that many were already disillusioned, and that the stories here are taken from an already thinning group of soldiers still possessed of some shred of belief in the war as a noble, or even glorious, conflict. Despite the mood which underpins the pages here, one can read between the lines for a picture. The stories are honest: things got worse between those elated first weeks wherein the French welcomed their allies so gladly, and the war that was to be over by Christmas 1914 was nowhere near ending, and it is in these stories that we witness the germinal seeds of disillusion and hatred of conflict. The majority of the illustrations which originally accompanied these accounts prioritise the heroism of their subjects, while a few offer a toned down presentation of the horrific battlefields. In this modern edition, we include a number of relevant photographic illustrations alongside the original drawings which accompanied the stories when they were first published. While the imagery of World War I is generally quite ingrained in our minds, these supplementary pictures are designed as on-the-spot reminders of how war was more than a century ago, as well as to provide demonstration of the weapons and technology of the era.

Enjoy reading World War One: The Unheard Stories of Soldiers on the Western Front Battlefields: First World War stories as told by those who fought in WW1 battles? You may also like these books