What Was the Bombing of Hiroshima?

By title
What Was the Bombing of Hiroshima?
By author
Jess Brallier Who HQ Tim Foley
By publisher
Penguin Workshop
By series
What Was?
At
Level R
Format
Other Formats & Editions
R* 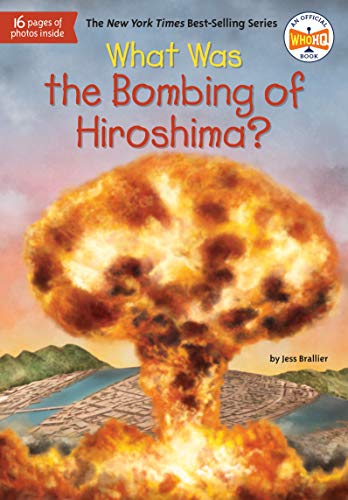 What Was the Bombing of Hiroshima?

Hardcover (Penguin Workshop March 17, 2020) , Reprint edition
Hiroshima is where the first atomic bomb was dropped. Now readers will learn the reasons why and what it's meant for the world ever since.

By August 1945, World War II was over in Europe, but the fighting continued between American forces and the Japanese, who were losing but determined to fight till the bitter end. And so it fell to a new president--Harry S. Truman--to make the fateful decision to drop two atomic bombs--one on Hiroshima and one on Nagasaki--and bring the war to rapid close. Now, even seventy years later, can anyone know if this was the right choice? In a thoughtful account of these history-changing events, Jess Brallier explains the leadup to the bombing, what the terrible results of it were, and how the threat of atomic war has colored world events since.

Enjoy reading What Was the Bombing of Hiroshima?? You may also like these books