By title
The Den
By author
Jennifer Abrahams
Format
Other Formats & Editions
? 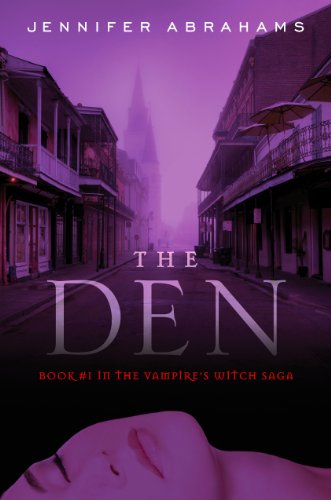 language ( Dec. 5, 2012)
THE DEN was inspired by actual events and their resulting, recurring nightmares.

Is it possible to run away from yourself? No. Skyla Jane Judge should know.

Fresh on the heels of a breakup and college graduation, Skyla Jane Judge feels an inexplicable urge to accompany an attractive stranger on a road trip from New York to New Orleans. Maybe it has something to do with what a psychic has told her about a past life. Maybe some old friends stuck between lives are waiting for her there.

Whatever the case, she gives in to the lure of Louisiana’s voodoo country and doesn’t look back. Longing for change, she uncovers a “den” beneath the haunted cobblestone streets of the French Quarter and, in the company of vampires, begins to discover her true self.

Skyla embarks on a journey to self-awareness that ultimately uncovers a secret ceremonial path to love and eternal enlightenment. Though change is what she wanted, is she ready for the irrevocable change her “new” friends offer her?

Enjoy reading The Den? You may also like these books