By title
Full Service
By author
Will Weaver
By publisher
Farrar, Straus and Giroux (BYR)
Format
Other Formats & Editions
? 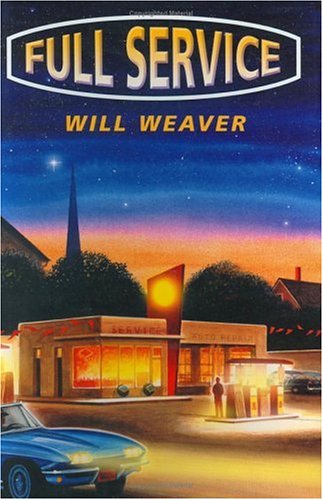 Hardcover (Farrar, Straus and Giroux (BYR) Oct. 12, 2005) , First Edition edition
The times they are a-changin' . . . The summer that Paul turns sixteen his mother pushes him to take a job in town instead of just working on the family farm. “You need to meet the public,” she says, which is saying a lot for a woman deeply committed to the tightly knit religious community to which they belong. And meet the public Paul does: He meets Kirk, the angry gas station manager; Harry, a reclusive and kindly gangster; and a family of hippies passing in a yellow peace van to San Francisco. He also meets beautiful Peggy, a high school sensation, and dark-haired Dale, her onthe-
side boyfriend who is headed to Vietnam. All of them come to the station – as well as girls on summer vacation, tanned and smelling of coconut oil, and ministers from Paul’s fundamentalist church, who are worried about his soul. As the summer progresses, Paul learns the secrets of his small Minnesota town and discovers that he’s ready to have a few secrets of his own.
With richly developed characters and a flair for arresting imagery, Will Weaver tells the story of the end of one boy’s innocence, unfolding at a time when the country as a whole is undergoing a difficult, deeply disturbing coming-of-age.

Enjoy reading Full Service? You may also like these books