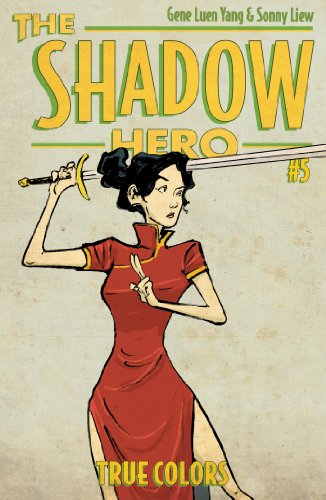 The Shadow Hero is based on the adventures of the Green Turtle, who solved crimes and fought injustice just like any other comics hero of the 1940s. But this mysterious masked crusader was hiding something more than your run-of-the-mill secret identity . . . The Green Turtle was the first Asian American superhero.

Now, New York Times–bestselling author Gene Luen Yang has created a riveting, hilarious, and moving origin story for the Green Turtle. With artwork by the unmatched Sonny Liew, this gorgeous graphic novel about heroism and heritage is also a loving tribute to the long, rich tradition of American superhero comics.

The fifth issue of The Shadow Hero, "True Colors," brings the action to a boil! Our hero Hank strikes out to destroy the shadowy head of the Tong of Sticks crime syndicate, but as usual he's way over his head…and even the advice and aid of his invisible guardian may not be able to save him!

Watch for the complete The Shadow Hero graphic novel, available in print and collected ebook in July 2014!

Enjoy reading The Shadow Hero 5: True Colors? You may also like these books