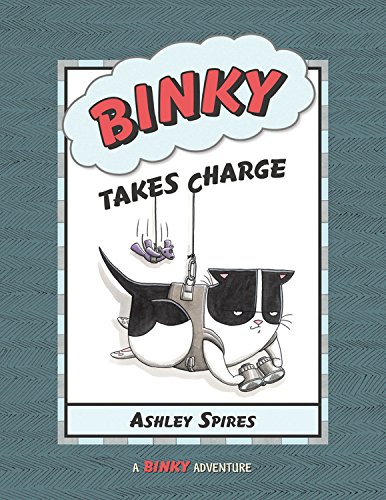 Paperback (Kids Can Press Sept. 1, 2012) , Illustrated Edition
Binky the Space Cat, star of this junior graphic novel series, has been assigned an important mission: to train a new space cadet recruit. But when the youngster named Gordon shows up at Binky's house, he's not the kitten Binky expected. In fact, he's not a kitten at all. He's a dog! Because of a new diversity program, dogs are now allowed into P.U.R.S.T. --- Pets of the Universe Ready for Space Travel (formerly Felines of the Universe Ready for Space Travel). Ever dutiful, Binky and his colleague Gracie give it their best effort to train him, but Gordon just seems too simpleminded to be up to the task. It's not until they've nearly given up in exasperation that the two cats learn the surprising truth about Gordon --- he's not the dimwitted dog they thought he was!
Author-illustrator Ashley Spires has created a hilarious premise for this unique series. The artwork, with its limited palette of soft neutral colors, keeps the focus on the animals' antics. The dialogue is mainly in cat- or dog-speak (?roooph!?), but Spires also includes many other sound effects (including ?pssssssss? for peeing and ?poot? for gas passing). This book is clever and funny, with lots of action, melodrama and laugh-out-loud physical comedy, making it enormously appealing to emerging readers. In addition, the inclusion of the topic of diversity here provides an opportunity for classroom discussions about differences and our expectations about others. The book also speaks to the character education concepts of initiative, responsibility and teamwork.

Enjoy reading Binky Takes Charge? You may also like these books