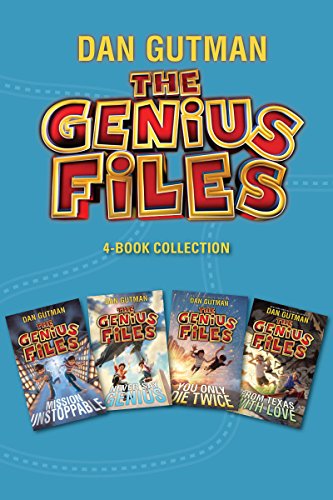 With the real-kid humor that has earned Dan Gutman millions of fans around the world, and featuring weird-but-true American tourist destinations, The Genius Files is a one-of-a-kind mix of geography and fun. This collection includes the first four novels in this bestselling series.

The Genius Files: Mission Unstoppable: The most exciting road trip in history begins! In this action-packed, New York Times bestselling adventure, twelve-year-old twins Coke and Pepsi McDonald embark on a family vacation you'll have to read to believe. As Coke and Pepsi dodge nefarious villains from the Pez museum in California all the way to the Infinity Room in Wisconsin, black-and-white photographs and maps put young readers right into the action.

The Genius Files #2: Never Say Genius: Coke and Pepsi McDonald never asked to be geniuses. They never asked to get lowered into a basket of boiling French fries, either. And they certainly never asked to be frozen in soft-serve ice cream, stampeded in a wild stadium riot, or kidnapped on a high-speed roller coaster. But that's what happens when a red-haired villain named Archie Clone is chasing you across America. This just might be the most dangerous road trip in history—and the most awesome!

The Genius Files #3: You Only Die Twice: As the twins continue their family road trip from Washington D.C. through the South, it will take every bit of their genius abilities to outwit their wacky enemies. It doesn't help that their parents remain totally oblivious! When they finally get to Graceland, Elvis's home in Memphis, Tennessee, Coke and Pepsi come to an explosive conclusion you'll have to read to believe!

The Genius Files #4: From Texas with Love: After their explosive escape at Graceland, twins Coke and Pepsi are ready to resume their trip across America. They travel through Arkansas and Oklahoma, visiting weird-but-true tourist stops along the way, and finally end up in Texas, home of the Weird Capital of the Country, Austin. The twins' many enemies—the bowler dudes, Mrs. Higgins, and Dr. Warsaw—all swear that they're done chasing Coke and Pepsi for good. But when the twins start receiving more codes and ciphers from a mysterious robotic voice, they know someone's after them. They just have to figure out who before the mystery villain finds them first.

Enjoy reading The Genius Files 4-Book Collection: Mission Unstoppable, Never Say Genius, You Only Die Twice, From Texas with Love? You may also like these books