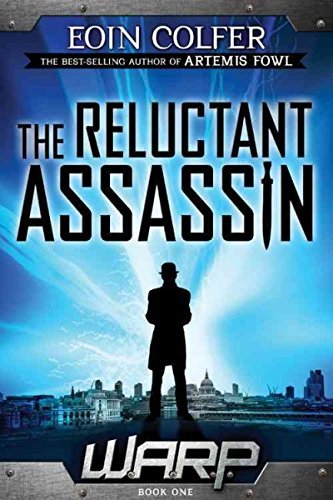 Paperback (Disney-Hyperion April 8, 2014) , Reprint Edition
Riley, a teen orphan boy living in Victorian London, has had the misfortune of being apprenticed to Albert Garrick, an illusionist who has fallen on difficult times and now uses his unique conjuring skills to gain access to victims' dwellings. On one such escapade, Garrick brings his reluctant apprentice along and urges him to commit his first killing. Riley is saved from having to commit the grisly act when the intended victim turns out to be a scientist from the future, part of the FBI's Witness Anonymous Relocation Program (WARP) Riley is unwittingly transported via wormhole to modern day London, followed closely by Garrick.

In modern London, Riley is helped by Chevron Savano, a nineteen-year-old FBI agent sent to London as punishment after a disastrous undercover, anti-terrorist operation in Los Angeles. Together Riley and Chevie must evade Garrick, who has been fundamentally altered by his trip through the wormhole. Garrick is now not only evil, but he also possesses all of the scientist's knowledge. He is determined to track Riley down and use the timekey in Chevie's possession to make his way back to Victorian London where he can literally change the world.

Enjoy reading WARP Book 1 The Reluctant Assassin? You may also like these books