Sit-In: How Four Friends Stood Up by Sitting Down 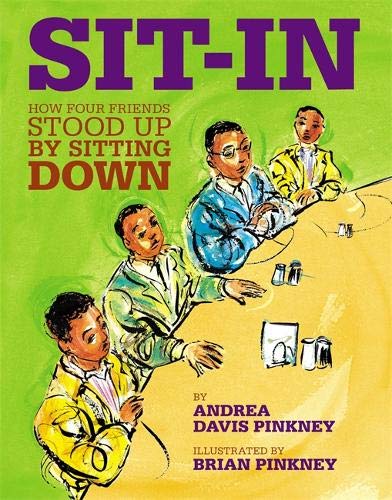 Sit-In: How Four Friends Stood Up by Sitting Down

Hardcover (Little, Brown Books for Young Readers Feb. 3, 2010) , 1 edition
It was February 1, 1960.
They didn't need menus. Their order was simple.
A doughnut and coffee, with cream on the side.

This picture book is a celebration of the 50th anniversary of the momentous Woolworth's lunch counter sit-in, when four college students staged a peaceful protest that became a defining moment in the struggle for racial equality and the growing civil rights movement.

Andrea Davis Pinkney uses poetic, powerful prose to tell the story of these four young men, who followed Dr. Martin Luther King Jr.'s words of peaceful protest and dared to sit at the "whites only" Woolworth's lunch counter. Brian Pinkney embraces a new artistic style, creating expressive paintings filled with emotion that mirror the hope, strength, and determination that fueled the dreams of not only these four young men, but also countless others.

Enjoy reading Sit-In: How Four Friends Stood Up by Sitting Down? You may also like these books