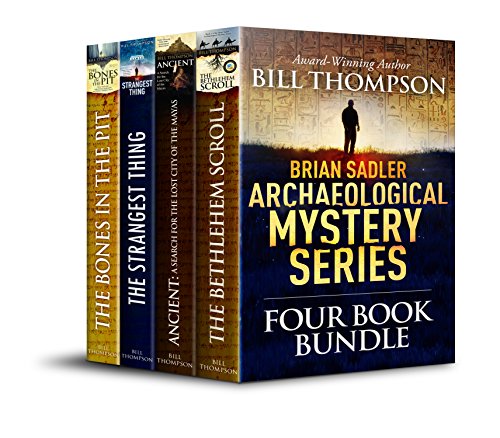 eBook (Ascendente Books July 24, 2016)
Read the first four exciting Brian Sadler archaeological mysteries. The Bethlehem Scroll introduces Sadler, a stockbroker and amateur archaeologist who, through a bizarre turn of events, ends up owning a prestigious Fifth Avenue antiquities gallery. A mob boss helps him acquire a priceless, previously unknown artifact - an eyewitness account of that night in Bethlehem. But when the Mafia's involved, things can go terribly wrong.In Ancient, book two of the series, Brian asks Nicole Farber, his beautiful lawyer who's now his girlfriend, to join him in Central America as he explores for a vanished explorer and a legendary city of gold. When she disappears he's forced by her captors to continue the search. The quest becomes a race against time to save Nicole and find Mayan treasure.The third book, The Strangest Thing, finds the U.S. president eager to explore a newly-discovered part of an ancient tomb in Palenque, Mexico. Deep inside the ruin, he vanishes from a room with only one exit. The Vice President calls upon his old friend Brian Sadler to unravel the mystery and find the answers. Deep in the jungles of southern Mexico Brian makes an astonishing discovery, one that might literally be The Strangest Thing - ever.The Bones in the Pit explores the mystery of Oak Island, Nova Scotia. A current TV series has spiked interest in the ancient Money Pit, discovered by teenagers in 1795. Local legends attest to vast treasure buried at the bottom of a two-hundred-foot shaft but despite millions of dollars spent and half a dozen lives lost, no one in two centuries has beaten the shaft's complex booby-traps. Whatever was hidden in the elaborate Money Pit is still there today.Brian and a devious Cardinal of the church are pitted against each other in a race to learn secrets protected by the Knights Templars for a thousand years. When Brian and his girlfriend Nicole become targets of a ruthless killer, the story careens to its incredible conclusion, an answer that may shake the foundations of Christianity.