Z Is for Moose

By title
Z Is for Moose
By author
Kelly Bingham Paul O. Zelinsky
By publisher
Greenwillow Books
By series
Booklist Editor's Choice. Books for Youth
At
Level I
Format
Other Formats & Editions
I 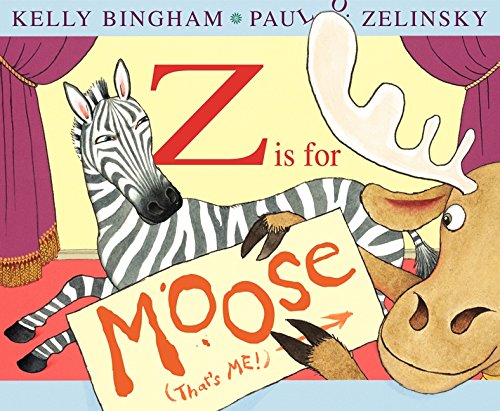 Z Is for Moose

Caldecott Medalist Paul O. Zelinsky illustrates Kelly Bingham's outrageously funny, critically acclaimed, and boundary-breaking story about a moose, a zebra, and the alphabet! Zebra wants to put on a show as simple as ABC, but Zebra's friend Moose has other (unexpected and hilarious) ideas!

Zebra thinks the alphabet should be simple. A is for Apple. B is for Ball. Easy! But his friend Moose is too excited to wait his turn, and when M isn't for Moose (Mouse gets the honor), the rest of the letters better run for cover. Exuberant and zany storytelling brings to life two friends and one laugh-out-loud comedy of errors that's about friendship, sharing, and compromise. The incomparable Paul O. Zelinsky's artwork is bursting at the seams—literally—with child appeal. Breaking the borders of the page, and creating the art both digitally and traditionally, Zelinsky turns convention on its head. The result is a picture book that is innovative, hilarious, and begging to be read over and over again.

Named a Notable Book for Children by the American Library Association

Enjoy reading Z Is for Moose? You may also like these books