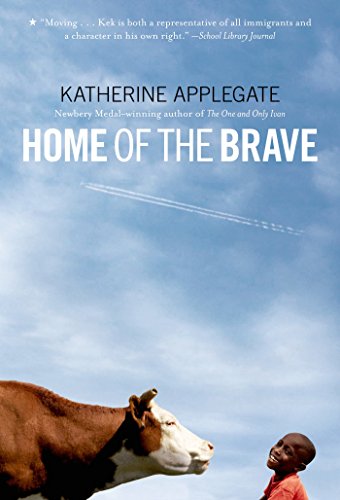 Bestselling author Katherine Applegate presents Home of the Brave, a beautifully wrought middle grade novel about an immigrant's journey from hardship to hope.

Kek comes from Africa. In America he sees snow for the first time, and feels its sting. He's never walked on ice, and he falls. He wonders if the people in this new place will be like the winter – cold and unkind.

In Africa, Kek lived with his mother, father, and brother. But only he and his mother have survived, and now she's missing. Kek is on his own. Slowly, he makes friends: a girl who is in foster care; an old woman who owns a rundown farm, and a cow whose name means "family" in Kek's native language. As Kek awaits word of his mother's fate, he weathers the tough Minnesota winter by finding warmth in his new friendships, strength in his memories, and belief in his new country.

Home of the Brave is a 2008 Bank Street - Best Children's Book of the Year.

Enjoy reading Home of the Brave? You may also like these books