By title
The One and Only Ivan Movie Tie-In Edition: My Story
By author
Katherine Applegate Patricia Castelao
By publisher
HarperCollins
By series
One and Only Ivan
At
Level V
Format
Other Formats & Editions
V* 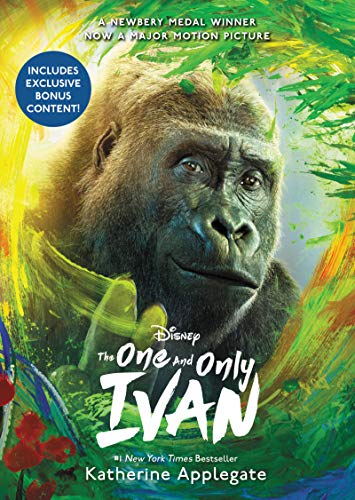 The #1 New York Times bestselling and Newbery Award-winning novel The One and Only Ivan is coming to Disney+ this summer, with a star-studded cast including Sam Rockwell, Angelina Jolie, Danny DeVito, Helen Mirren, Bryan Cranston, and more! This movie tie-in hardcover edition features full-color images from the film, quotes from the stars, and new cover art.

Ivan is an easy-going gorilla. Living at the Exit 8 Big Top Mall and Video Arcade, he has grown accustomed to humans watching him through the glass walls of his domain. He rarely misses his life in the jungle. Mostly, he thinks about art. Then he meets Ruby, a baby elephant taken from her family, and she makes Ivan see their home—and his own art—through new eyes. When Ruby arrives, change comes with her, and it’s up to Ivan to make it a change for the better.

The One and Only Ivan was hailed as a best book of the year by Kirkus, School Library Journal, and Amazon and earned four starred reviews.

And don’t miss the sequel to this beloved modern classic—The One and Only Bob!

Series
One and Only Ivan