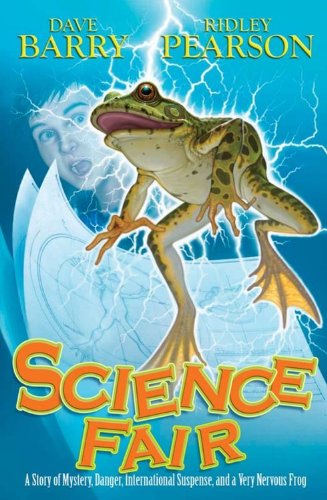 Hardcover (Little, Brown Books for Young Readers Oct. 14, 2008) , First Edition
Grdankl the Strong, president of Kprshtskan, is plotting to take over the American government. His plan is to infiltrate the science fair at Hubble Middle School, located in a Maryland suburb just outside Washington. The rich kids at Hubble cheat by buying their projects every year, and Grdankl’s cronies should have no problem selling them his government-corrupting software. But this year, Toby Harbinger, a regular kid with Discount Warehouse shoes, is determined to win the $5,000 prize—even if he has to go up against terrorists to do it. With the help of his best friends, Tamara and Micah, Toby takes on Assistant Principal Paul Parmit, aka "The Armpit", a laser-eyed stuffed owl, and two eBay buyers named Darth and the Wookiee who seem to think that the Harrison-Ford-signed BlasTech DL-44 blaster Toby sold them is a counterfeit. What transpires is a hilarious adventure filled with mystery, suspense, and levitating frogs.

Enjoy reading Science Fair? You may also like these books